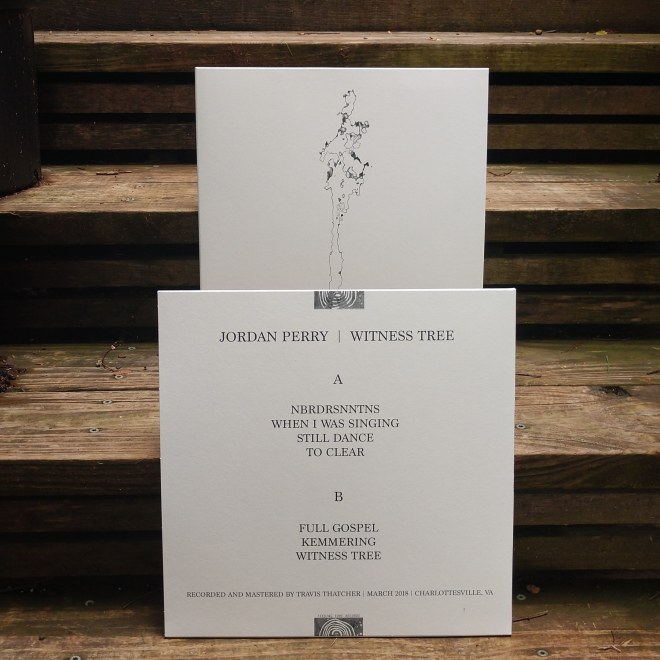 Vinylization of a self-released cassette issued earlier this year by our favorite Virginia-based guitar player. Witness Tree is a brilliant follow-up to Perry’s eponymous debut LP (FTR 376), and expands upon the form-abstractions he first displayed there.

Mr. Perry has a firm and solid touch to his string wrangling, but unlike many of his contemporaries, he doesn’t seem to feel compelled to resolve all the melodic questions he raises. Perry often stops in a place he finds interesting, repeating rhythmic figures while trying out variations on the note/chord sequence that stopped him in the first place. It’s a goddamn fascinating approach and allows him to explore textual aspects of the acoustic guitar that are not investigated often enough.

In a certain sense, Perry’s playing feels akin to that of Jon Collins, since both guitarists appear to acknowledge the American Primitive School, while approaching its compositional orthodoxy with an attitude that substitutes experimental tendencies for blues-base thinking. But the way they resolve these  themes is quite different. Perry’s slower pacing and precise string selection eschews the aleatory for a kind of mindfulness that is as invigorating as I usually find randomness.

A deep and lovely dig into the outer edges of acoustic guitar rambling.

Much needed reissue of the extremely limited 2017 debut LP by Virginia guitarist, Jordan Perry. We were turned on to it when Chris Guttmacher at Blue Bag Records in Cambridge told Kassie Richardson of Good Cry (who did the initial 100 pressing) to send us a copy. He thought we might be into it, and halfway into one spin we knew he was right.

There have been several fat boatloads of acoustic guitar players floating across our turntable the past few years. And to be honest, we’ve dug the majority of them. Seems like there must be a lot of good stuff in the water, or something. Despite this, a preponderance of the players we’ve enjoyed have definitely been in the American Primitive mode. Lots of swift modal aktion with a folk/blues base, invaded by various foreign agents. Jordan Perry’s approach to his guitar is quite different.

Although there are some basic völk sonorities in his playing, Mr. Perry’s brunt combines these with more avant garde note selections and compositional gambits, as well as a string attack with classical qualities. While there’s a gentleness to the melodies at which he eventually arrives, Perry’s journey crosses prickly patches of tone clusters, and has a circular logic that defies pop logic. A few passages recall moments on All Is Ablaze,our recent album with experimental player Julia Reidy (FTR 338), while some of the open strumming has a beautifully languid quality verging on mid period William Ackerman.

All of which makes this a record very deserving of much personal headspace. Give Jordan Perry some room and you’ll be very glad you did. We promise.  -Byron Coley, 2018 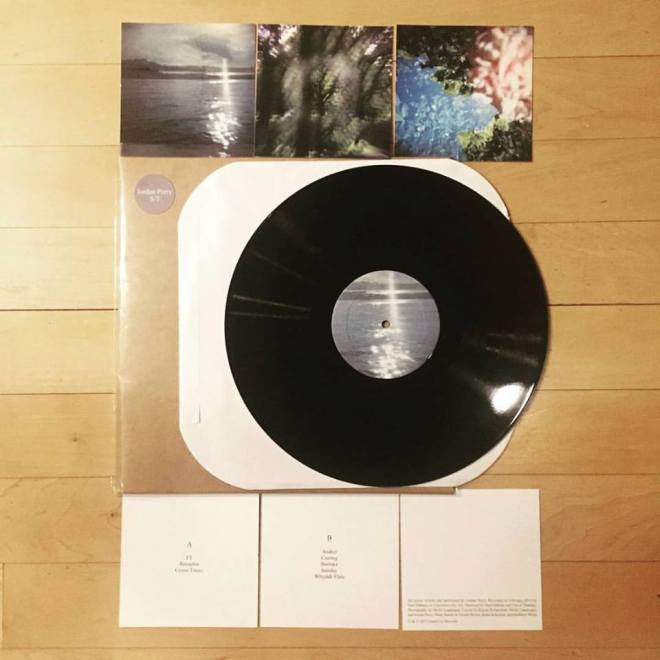